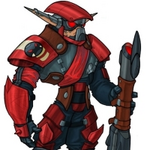 Hello, I'm Tyler (a.k.a. XSuperGamer or FlamingCobra) and I am a 16 year old high school student in the United States. I want to major in either Computer Science (with a concentration in game design), Computer Engineering, or Aerospace engineering.

I began contributing to this wiki because I think that colonizing space is one of the most important goals of humanity. In my opinion, there are two main reasons for space colonization. The first is that right now, the population on Earth is bursting at the seams. We are either at, or above, the carrying capacity of our planet. Simply put, there are just too many people in the world using resources far too quickly, and making way too many problems in the process. The only way to humanely resolve this problem is to ship enormous numbers of people off the Earth and either onto other planets, or into gigantic orbiting space colonies. If we don't, a catastrophe, like a third world war, another plague, or a famine, will happen. Then, many many people will die and the human population will fall below the Earth's carrying capacity. Nature has ways of fixing things. If we don't, it will.

The second reason for colonizing space is to ensure the long-term survival of the human race. The likelihood of some super disaster eventually happening that will wipe out all the people on Earth is relatively high. Like Keith said, we have all our eggs in one basket, and problems are just lining up to obliterate us. We need more baskets.

The problem is, no single government, or even a group of cooperating governments, will ever make this happen. Mostly because every government believes there are more important problems at hand, and because it just costs too much.

That's why this Wiki exists. It all starts with us. Individuals. Together, we can make a difference. When we work together, we can change our future. But it just doesn't spontaneously happen. We can't just sit around and wait for "it" to happen one day. We have to take initiative. Movements never happen until someone starts them.

Here, on this Wiki, we're going to get it started. You can help out by engaging in mass collaboration with others, sharing ideas, taking part in discussions, and creating new articles. Why should we put off for tomorrow what we can do today? We should start now, before time runs out.

Retrieved from "https://spacecolonization.fandom.com/wiki/User:XSuperGamer?oldid=3736"
Community content is available under CC-BY-SA unless otherwise noted.